The School of Foreign Languages of Jiangsu University of Technology (hereafter referred to as the SFL) was founded in 2006, expanded from the former Department of Foreign Languages established in 1993. The SFL now has four fields of study, namely English (including two branches: English Education and English Translation), Business English, Japanese, and German. The SFL also offers College English Courses for all undergraduates and postgraduates on campus. The SFL started its enrolment of English majors on the two-year programme from 1990, and then from 1998 to the present, the enrolment of undergraduates, i.e., those on the four-year programme. Majors in German have been admitted since 2007, and those in Japanese since 2009.In 2013, the school started to enroll majors in Business English. Up to now, The SFL has altogether 25 years of English graduates, 5 years of German graduates, and 3 years of Japanese graduates, with the total number of more than 4500 graduated students. At present, the number of registered students in the School is 1158.

The SFL has now established international partnership with nearly 10 universities in the US and European countries, and the School regularly sends faculty members for academic purposes in the partner universities. Up to now, more than 40 teachers have been sent to study abroad.

The SFL also commits itself to the training of young faculty members, and quite a few have won titles and prizes in the national and provincial teaching contests in recent years. 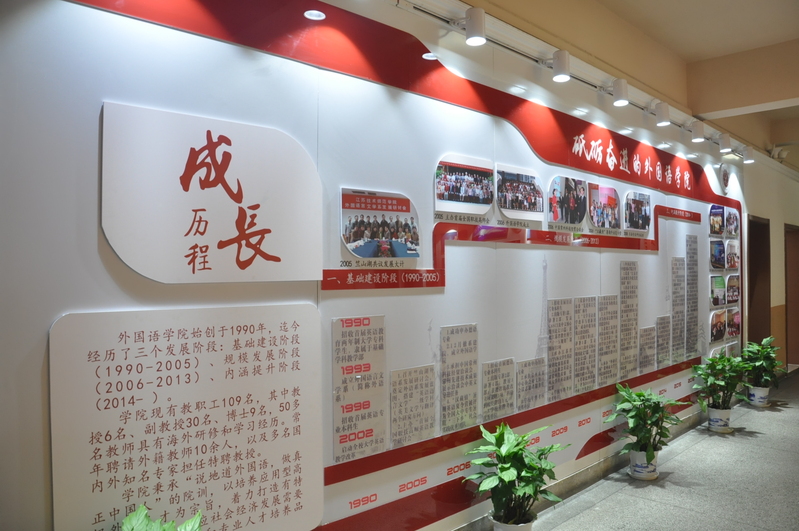 For the past 5 years, the teachers of the SFL have undertaken 5 projects on academicresearch at provincial or even higher level and 38 projects on academicresearch at municipal level, and won over 3 research awards of Excellence in Philosophy and Social Sciences of Jiangsu Province. There have been more than 400 academic papers, of which 58 (including 28 CSSCI papers) belong to key journals, 9 books, 15 translated works, and 5 textbooks (including a national one) written by the teachers.

The SFL regardsits disciplinary development as themomentum for theadvancement of specialities, and boasts of English as a feature speciality of JSUT, four courses (Advanced English, Phonetics, Basic English and English Strategy) as model courses, and College English as one of the university’s key construction courses. The school also has the College English teaching team as a model teaching team of JSUT, and 2 science and technology innovation teams, both of which were approved by JSUT in 2013.